One of my many ‘homes’ is Chiang Mai, Thailand. My family and I travel there every winter to attend mission conferences. These weeks in Thailand are always a highlight for me. I spend time with other MKs and share my own experiences from past year. These weeks are filled with reconnections over delicious Thai food, new experiences, and explorations in the city, always coupled with a hilarious memory or two. This year in Thailand was no exception.

A few days ago my family and I took a songthaew (a type of transportation in Thailand resembling a pickup-truck) into the city. As the afternoon passed and the sun began to set, we began to get hungry. This particular area of town was new to us, and we soon found ourselves trailing the dusty, cobblestone sidewalks of Chiang Mai in search of Thai food. We discovered a typical Thai outdoor food court, where street vendors sell inexpensive plates of fried rice, coconut curry, and rice noodles with vegetables and shrimp. These booths usually surround a covered area of mismatched tables and chairs. We took our seats, purchased dinner, and ate quickly. As my little sisters finished their plates of noodles, my dad, sister, and I explored an outdoor market beside the food court. We roamed the narrow, crowded isles until we found a booth laden with fresh vegetables, fruit, and blenders. My twin and I glanced at each other. We wanted a smoothie. We perused the booth carefully before deciding on a banana and fresh ginger smoothie with beetroot. Despite the unusual look of the street vendor as he peeled the banana and beetroot, we wanted to try something new and interesting.

After placing the other two ingredients into his blender, the street vendor held up an unpeeled, two-inch chunk of fresh ginger. “Ok?” he asked confidently. My sister’s eyes bulged. ‘A little less’ she motioned with her fingers. He grinned and tossed the unpeeled ginger into his blender along with another two inches of ginger. We gulped. He had clearly misunderstood our request, but it was too late now. The street vendor hummed as he blended the ingredients and divided the bright red smoothie into plastic cups. He handed them to us with a smile. “You like ginger?” He asked as we thanked him. We nodded hesitantly. He laughed, “Really? I’ve never eaten ginger! I don’t like! Too spicy!”

My dad called a songthaew driver to take us back to our hotel. My sister grimaced with each sip of our ginger-laden smoothie. “I don’t like! Too spicy!” was a statement we now whole-heartedly agreed with. 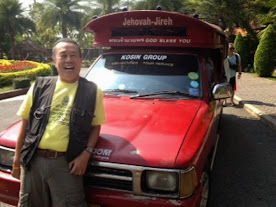 Our songthaew came twenty minutes later. My family of seven crowded into the back. The songthaew driver, who was a Christian and played Christian music for his western clients, turned on music. We laughed as ‘Every Move I Make’ began to play softly from the front seat. “Na na na! Waves of mercy, waves of grace…!” We sang along merrily. The driver stopped at a red light and hopped out of the driver’s seat and ran around to the back of the truck. “You like the music?” he asked. We laughed again and nodded. He cranked up the music. We sang louder. Forty-five minutes later, the songthaew skidded to a halt in front of our hotel, music blaring. We piled out of the pick-up truck, singing along with the songthaew driver and carrying half- empty cups of ‘spicy’ ginger smoothies. Laughing, we waved goodbye to the driver. It was an evening I won’t forget.